May 03, 2013
Jamie Oliver is probably one of my favourite TV chef. I started watching his cookery shows since Naked Chef, and watched almost every single shows after that - from the straight forward cookery show to the more documentary series of training young chefs and revolutionising school dinners.

Jamie's restaurants empire is growing in England, and they are about everywhere, even at the airports. 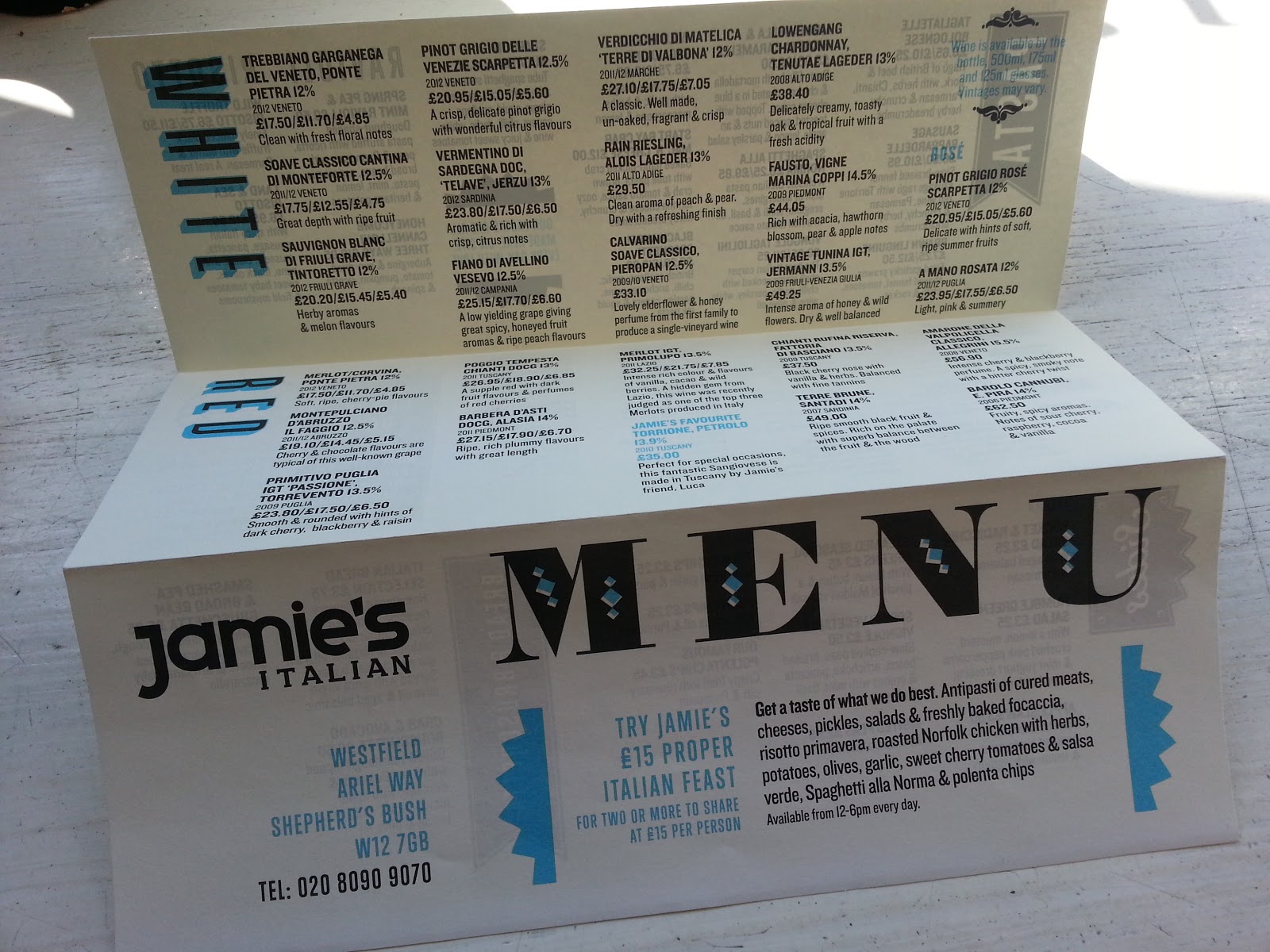 I have been to Fifteen years ago and was blown away by how flavoursome the food was. However, Fifteen is not the easiest place to book a table, and it was a fairly pricey. So the growing number of Jamie's Italian is a perfect alternative - reasonably priced (more or less the same price as Pizza Express), excellent food and dotted around some good locations in London.

Scott and I went to the one at Shepherds Bush Westfield one evening after work. 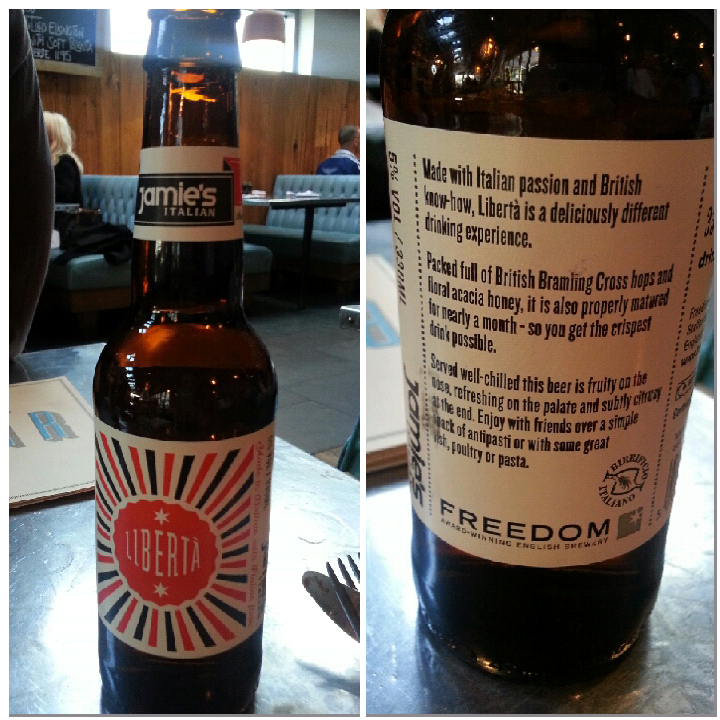 I didn’t realise they do their own beer through Freedom Brewery. Scott said he could taste lavender in it, I couldn’t. I think the lavender flavour was from the floral acacia honey. 5% alcohol was relatively high for a beer, but it was very refreshing. 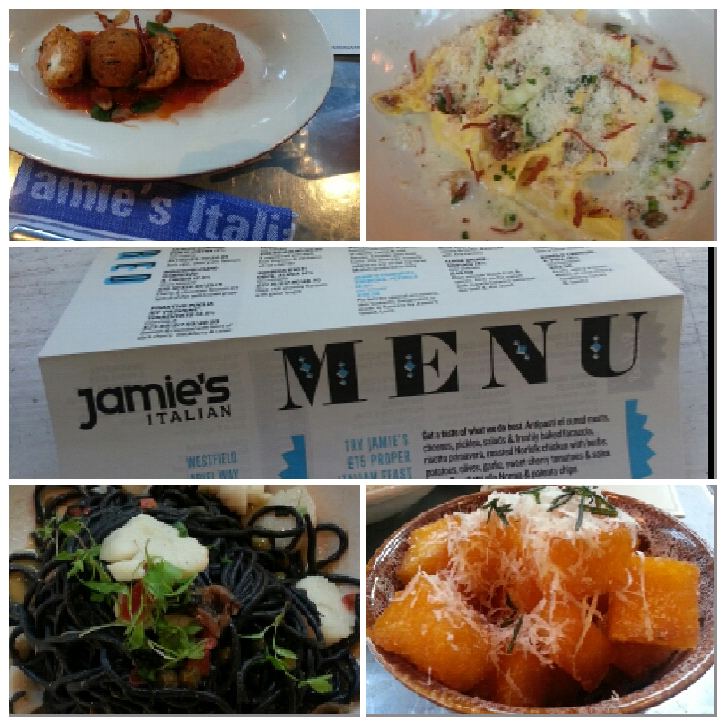 We shared a starter of the crispy rice balls stuffed with mozzarella cheese. Perfect sharing dish as a small starter. Very crispy on the outside with a soft centre. The tomato sauce with it gave it the perfect wetness to compliment the dry crispiness of the rice balls.

For main, Scott chose Mortadella & Ricotta Caramelle. It was pasta filled with mortadella and chicken, coated with a creamy blue cheese sauce. I don’t like blue cheese so I didn’t try it. The little parcels of pasta looked very cute on the plate.

I had Black Angel Spaghetti - scallops with squid ink spaghetti. As the dish landed at my table, the smell was just incredible! Normally with a squid ink dish, you can't avoid to get a black rim round the lips and blacken teeth. But this one won't! Thank god the squid ink wasn't part of the sauce. Scallops were cooked nice. The pasta was so flavoursome!! The dressing/sauce was the star of the dish - the use of anchovies and capers made all the difference and turned this dish into something really special. Anchovies and capers not only gave  natural saltiness, but also compliment well with the scallops to give the dish a taste of the sea. A very simple but exquisite dish. 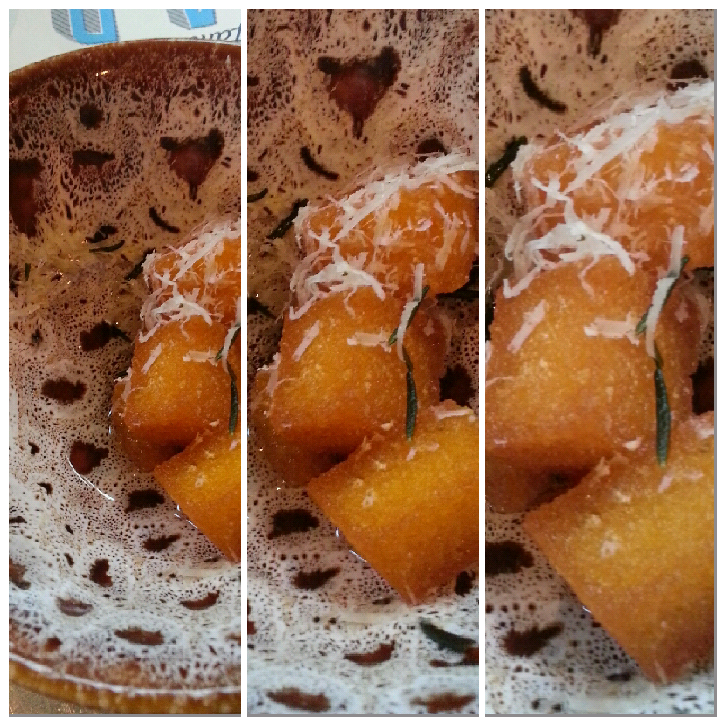 We ordered the Polenta chips as a side dish. They came as cubes rather than the traditional chips shape. Unexpectedly rich in flavour. I guess the parmesan cheese must be melted into the polenta to create that rich flavour. The only criticism I had was the oil all sank to the bottom of the bowl, the last couple of pieces of the chips were basically sitting in a puddle of oil. The chips either should be well drained and blotted in the kitchen, or it wouldn't be too hard to line the bowl with paper to absorb the excess oil. 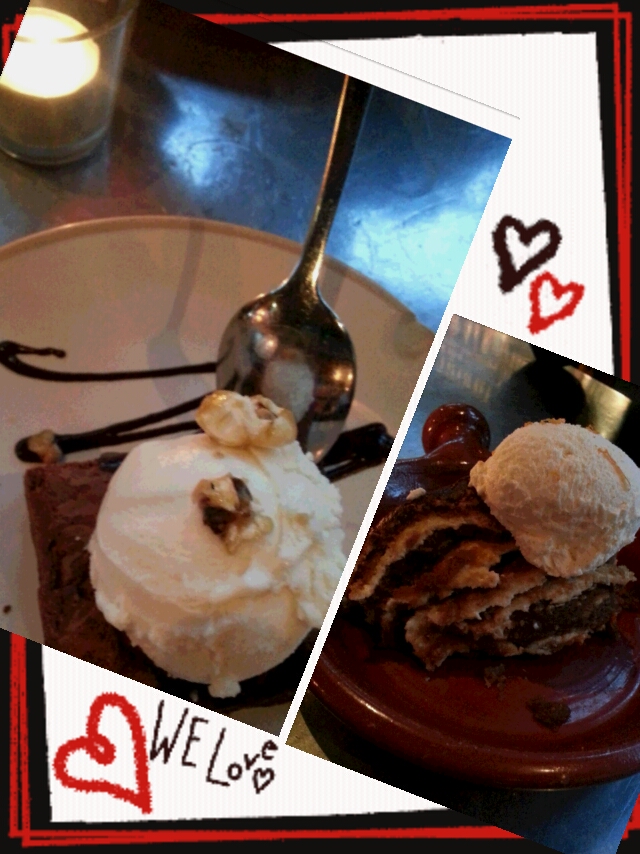 For desserts, I was so look forward to try the Lemon Meringue Pie, but sadly it ran out. We went for the Epic Brownies (love the name!), and Tiramisu.

The tiramisu was a little bit strange I would say - the orange blossom flavour was just too powerful, all I could taste was the orange, not a hint of any coffee flavour that you would normally get from a tiramisu.

The Epic Chocolate Brownies was a surprise! I have a problem with brownies because they are always too dense and intense and rich for my liking. Epic Chocolate was light and fluffy. The amaretto ice cream had this semi sorbet texture, so tasty and light to round off the meal.

At this long weekend, why don't go down to a Jamie's and treat yourself to a nice meal?

September 07, 2016
Gone for the days that we cannot order liquids on Sephora, or cannot visit the Marc Jacobs boutique if you are not in London… Marc JacobsBeauty is now available from John Lewis !!! They are available online or in selected stores.
Post a Comment
Read more

July 03, 2013
I love Lego and I love Makeup - what if there is a Lego in the makeup world....?! Jouer Cosmetics has made this dream come true, especially with the two palettes that they have: Blushing Beauty Collection and the Little Black Dress palette. A few YouTubers like Essie Button , Fleur De Force , and Ameila have talked about the Blushing Beauty Collection on their videos, but I actually prefer the Little Black Dress palette instead.
Post a Comment
Read more